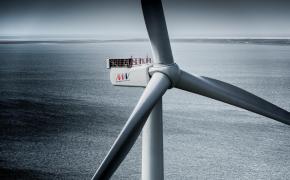 Northwester 2 is proud to announce it has reached the official close of financial agreements with all key stakeholders and banks for the construction of a 219 MW offshore wind farm. This project will be the sixth Belgian wind farm in the North Sea and will be built 50 km off the coast of Ostend.

For Parkwind it means the commencement of the construction of its 4th offshore wind power plant, which it will realize in partnership with the Japanese industrial group Sumitomo Corporation.

With its financing secured, the project plans to start the construction works in the spring of 2018.

Peter Caluwaerts, Project Director: “Northwester 2 is expected to be completed in the first half of 2020 and will have a capacity of 219 MW generated by 23 Vestas V164-9.5MW turbines. The installation will be able to generate 818,60 GWh of electricity annually, enough to cover the energy consumption of 220.000 households.”

Parkwind’s CEO’s François Van Leeuw and Eric Antoons congratulate the hard work of the Parkwind teams and shareholders, government officials, suppliers, lenders and advisors, “allowing us to feed some positive energy into a market environment that has no choice but to embrace renewables. Parkwind’s ambition is to export its industrial concept worldwide.”

The vast experience of the Parkwind team builds on the success of the Belwind, Nobelwind and Northwind wind farms. The Northwester 2 project will use the latest technology and equipment, greatly increasing the chances of the project meeting optimal conditions for safety and timely delivery within the planned budget.

Northwester 2 has contracted the services of Jan de Nul for the fabrication and installation of foundations and for wind turbine installation. The wind equipment will be supplied by MHI Vestas Offshore, offering its V164 9.5MW technology. The Offshore High Voltage Station designer and fabricator Bladt, the Inter array cable manufacturer NSW and the Export Cable manufacturer Nexans complete the list of key suppliers.

Marsh and Profin have developed an insurance portfolio subscribed by lead insurer Codan.

Loyens & Loeff on behalf of the project and Jones Day as lenders’ counsel were the legal advisors on this transaction.

Mott McDonald was appointed as the lenders’ technical advisor.

Northwester 2 is a project company holding a 219MW concession in de Belgian territorial waters. Current shareholders are Parkwind (70%) and the Japanese industrial group Sumitomo Corporation (30%). Parkwind, a leading 360° offshore wind company, has been in charge of the development and will manage construction and operational activities. The company is headquartered in Leuven (Belgium) and will operate from the Ostend harbor.